Our household has now been a Nintendo switch household for a few years… then last year we welcomed a trio of switch lites because mama isn’t so great at sharing! One of my guilty pleasures with the switch is how easy it is to download games via the e-shop… and sometimes the games are either dirt cheap or even free!

A few weeks ago I impulse bought Evoland – Legendary edition which is actually the two Evoland games together. The first one, which can easily be beaten in a few hours, as well as Evoland 2 which is a more complete experience. I don’t remember which youtuber (yes, I’m watching completely random things on there as well) recommended it, but it was about 10$ so I didn’t hesitate much.

This second game aims to take you through the different era of rpg video games as well as different game style. While the first game was cute, but mostly under developped, this second « try » was actually a lot of fun for me. Of course there’s nothing new or ground breaking here, but the graphics are cute, the gameplay is easy enough and there are lots of pop culture references. Like… tons! So if you like easter eggs, this might be fun for you as well!

Since I had a good time with the game, I decided to go ahead and make a fan art project out of it. It seemed like a good idea because while the graphics do get more detailed when you jump to more modern time periods, they are still basic enough that I felt confident.

Let’s not entertain the idea that I should be crocheting my Skyrim dragonborn because no. 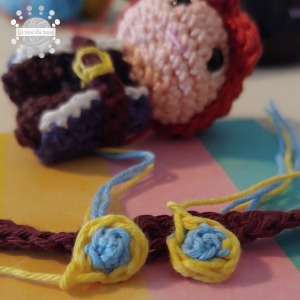 While we meet quite a few characters throughout the game, most are not that memorable and I decided to stick with the may party members, as well as the final antagonist. So five little dolls to put together! Once again, the challenge with these were to manage to put into « crochet » all the tiny details that make each character unique.

When I start these project, I often wonder if it might be a good idea to explore different mediums for all these tiny details and then incorporate them onto my crochet dolls. However, while I’m quite adept at crochet… I’m not all that good at anything else and I’m afraid to ruin all my hard work by dabbling in things I have little knowledge in… Still, sometime I’ll probably be exploring polymer clay sculpting for belt buckles, goggles and such… to be continued?

Once my adorable little Kuro was done I was thrilled with the result… until I noticed his belt buckle being off. Honestly, I could have just left it, but I know myself and that tiny detail was going to haunt me. Luckily, it was a somewhat easy fix!

It was now time to get started on the next character; the adorable Fina. And that’s when I started having major regrets about all of my life choices. Turns out the characters are a lot more detailed than I thought… but I remained steadfast in my decision to crochet all five characters… so I started by painting the eyes.

Now, since I discovered how to customize safety eyes (thanks Youtube!), I really enjoy doing it! I’m almost tempted to try and paint detailed ones… almost!

But then it was time to crochet Miss Fina and things weren’t looking great. First, I had the hardest time fiding the right colors and then the details were hard to capture, as well as the construction of her outfit… by the time I was taking this picture, I just wanted to give up.

But it would have been a terrible waste of time to just abandon her when she only needed hair to be completed… and I had the right color on hand.

In the end I’m happy I finished her and after a good night of sleep, she’s now growing on me. But then I took a real good look at the other characters and stress was starting to build up… so much pressure.

The whole reason I’m doing these fan art posts, and enjoying them so much, is because they help me relax! So what if I decide that tiny Kuro and little Miss Fina are just enough to go sit pretty next to the video games corner of the living room? Yep, I had my fun and I CAN call it quits!

So, any good video games (PC or Switch) to recommand?

Discover the pattern I used as the base for this project!

The pattern was heavily modified for this project.